Levi’s Stadium Right In Your Backyard 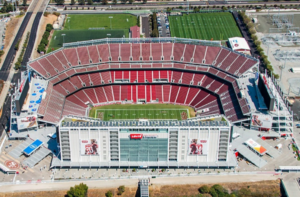 San Mateo County happens to be right next door to Santa Clara County. What that means for you is that Levi’s Stadium is right in your backyard. Whether or not you’ve been to a National Football League (NFL) game, there is nothing better than California weather and watching football in a brand new facility. The best part is that the stadium is located outside of the hustle and bustle of San Francisco. You now can incorporate professional football into your lazy Sundays every fall.

I have been to Levi’s Stadium on three separate occasions. Once just by my lonesome to pass the time. The other two times I went with a really good friend of mine who is a 49ers fanatic. His name is Fabian and it’s almost more entertaining watching him at football games than it is watching the game itself. It’s really special to for Fabian to make out from Las Vegas to catch a game. He is part owner of a booming tree service company (besthendersontreeservice.com) back in Vegas. He rarely has a day off, but has been trying to convince the owners of Levi’s Stadium to let him handle their landscaping in exchange for season tickets. Nothing yet, but if you happen to know the owners please reach out to me. 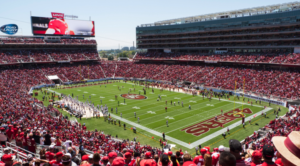 You may have heard that Super Bowl 50 was hosted at Levi’s Stadium. Yep, you literally have one of the nicest sports facilities within driving distance from your front door. But don’t let yourself be fooled for a second. Although Levi’s Stadium is home base for the San Francisco 49ers, there is a wide variety of other events going on year round.

The Grateful Dead performed a concert for their fare well tour. The stadium was arranged in order to increase the attendance to over 80,000 people. Not bad considering the stadium is designed to only hold up to 65,000 attendees on any other day. Other events include motocross, music concerts, wrestling entertainment, hockey, conferences both indoor and outdoor, and is fully equipped to host the FIFA Soccer World Cup. 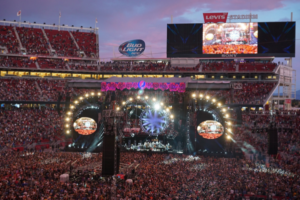 If you’re the environment friendly type you’ll be very glad to know that Levi’s Stadium achieved the Gold LEED Certificate by the U.S. Green Building Council. Given the size of the facility, and the fact that it is primarily a sports arena, it’s quite the achievement.

If you’re just wanting to take a walk through Levi’s Stadium you can go on a scheduled tour, which take place every week Monday through Saturday. You can eat lunch at their Bourbon Steakhouse or even brush up on your 49ers football history by visiting the beautifully constructed museum.

One of the my favorite parts about Levi’s Stadium is the vast collection of art pieces spread all throughout the stadium. Many of the pieces are from local artists and are very large in size. 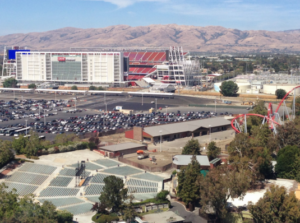 I also wanted to make sure I touched on transportation. Currently you can drive to the stadium, take the VTA light rail and take the Amtrak or ACE train systems. There is also current construction being done to have s BART (Bay Area Rapid Transit) extension come straight into Santa Clara. If you happen to live close to Levi’s Stadium you can walk or bike on the San Tomas Aquino Trail, which leads right up to the facility itself.

Even though it may be a little early in the year to be thinking about football, don’t forget everything else Levi’s Stadium has to offer. Make a day trip and take a tour, watch some of the best music artists perform, or simply grab a bite to eat for lunch.

You can always reach out to me with any questions you have. Contact Me Here.